Closer to the Truth 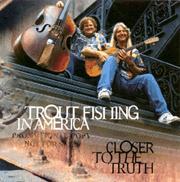 Closer to the Truth is a family friendly folk rock album from Trout Fishing in America.  “Closer To The Trout ,” a review in Songwriter’s Monthly, said of this album,

The Trouts are quite an amazing pair of writers. Great ideas and clever lines seem to come naturally to these guys. They can write a great song about anything from dogs chasing cars to people getting older. Keith and Ezra have a gift, lucky for us they like to share. Revealing and universal, this is an album that really should be in your collection…especially if you want to have a look at how great songs are constructed.