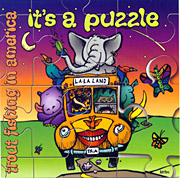 It’s a Puzzle is a Dr. Toy’s “10 Best” album with a selection of songs that express the experiences of kids everywhere. In fact, “Alien in My Nose” grew out of one of Trout Fishing’s songwriting workshops.

Here’s what FamilyFun said about It’s A Puzzle:

The folkie duo of Ezra Idlet and Keith Grimwood specialize in wondrously worded acoustic ditties that appeal to lyrics-loving parents as well as kids, largely because the pair never seem to run out of themes that tickle the fancies of both generations. They salute the creative urge with the funky acoustic ‘I Get Ideas,’ sympathize with kids who screw up a lot in the poppy acoustic ‘Wrong Right’ (which contains the marvelous line ‘I’m running out of excuses in a floppy pair of shoes’), and concoct one of the cleverest gross-out songs ever with ‘Alien in My Nose.’