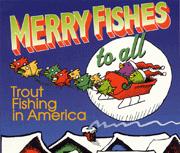 Merry Fishes to All received a Grammy nomination for ‘Best Musical Album for Children’.  Family Fun magazine called it ‘the Year’s Best Christmas CD,’ saying that the songs are ‘so fresh they practically wiggle.’ Ben Fong-Torres wrote in Parade magazine about its ‘comic sugarplums such as ‘I Got a Cheese Log.” Child and Chicago Parent magazines chose Merry Fishes as one of the best holiday CDs this year, and it also won a Parents’ Choice award. Songs from the album were also featured in a National Public Radio program called ‘NPR presents: A Holiday Folk Music Tour with Judy Collins.’

This was the second of four Grammy nominations for Trout Fishing in America, also known as guitarist Ezra Idlet and bassist Keith Grimwood.

We’re offering printable pdf files of lyrics for Merry Fishes so your family can gather round the piano and sing these new holiday songs or take them caroling. Click the titles below for individual song lyrics.

Credits
Produced by Fred Bogert/Briarpatch Audio Productions, Inc., Hendersonville, TN
“Snow Day” by Henry L Hipkins
“You Gotta Get Up” by Rich Mullins
“My Birthday Comes On Christmas” by Louis Bush and Leon Pober
Released in 2004