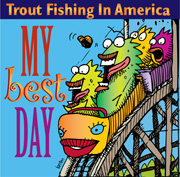 My Best Day was recorded live in Conway on a snowy day, and presented on AETN. It was nominated for a Grammy in 2006, and won NAPPA Gold Award and a Parents’ Choice Silver Honor. Now you can experience the music without the snow.

In the 30 years that Trout Fishing in America has been making children’s music, bassist Keith Grimwood says one question always comes up: ‘What is the stupidest song you guys have ever written?’ Turns out it’s ‘Sailing,’ a clever little sea chanty that’s big on wordplay. From a ‘dumb-floundered’ pirate to ‘marooned’ sailors aboard colliding cargo ships hauling red and brown paint, ‘Sailing’ is just one of 15 songs featured on the thunderous concert CD from the smart, musically sophisticated duo of Grimwood and guitarist Ezra Idlet.

Their collaboration on ‘My Best Day’ is not to be missed. Recorded before a live audience in Arkansas earlier this year, the album is steeped in the acoustic folk tradition. At the same time, it expands into the realms of straight-ahead rock, boogie-woogie and Professor Longhair-style ‘Day Care Blues.’

OUR KID CRITIC PICKS THE PLATTERS THAT MATTER by Charlie Heller

Trout Fishing in America – ‘My Best Day’ Trout Fishing in America’s new live album could be described as something akin to the Allman Brothers Band for kids, minus the lengthy jams, and with slightly younger audience participation – like on ‘Simon Says’ (you can guess how that song goes). The duo mixes humor into their songwriting and inspires the crowd of fans, who are very energetic for their age. Inspired by everything from an ice-cream man who would ‘fill the cup all the way to the bottom’ (‘Fill It Up’), to the similarities between playing at a day-care center and a prison (‘Day Care Blues’), the goofy lyrics are a main selling point for Trout. The whole thing is classic kids’ music, but the kind that can also make adults boogie and laugh.