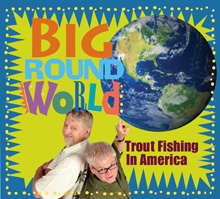 If you are reading this, then you are a part of our Big Round World. We all have to share and care for this world. Here are 14 songs about our life experiences as we’ve traveled this Big Round World. This is our first full-length musical production from The Trout House studio. It is an exciting new phase in our musical development. We have been writing songs and playing music together for over 32 years and we’re still happy to be doing it.

Big Round World was nominated for a Grammy Award. Big Round World also topped NPR’s “The Year in Music for Kids” List, received a NAPPA Gold Award from the National Parenting Publications Awards and was awarded the Parent’s Choice Silver Honor. Big Round World was also awarded Album of the Year honors at the Northwest Arkansas Music Awards.

In short, a lot of people like this album. We think you will, too.

Find the lyrics to Trout Fishing songs at MP3lyrics.org, and hear NPR’s review.

Songs on this album:

One Response to Big Round World