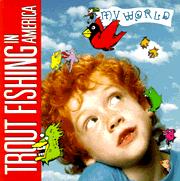 My World is an award-winning collection of kids’ songs that give grown ups a peek into a child’s world — and vice versa. “If this doesn’t brighten your day, nothing will,” says FamilyFun magazine. Chicago Parent put it like this: “Children’s music from some grown-ups who really get it!”

“Science Fair”
Trout Fishing performed a concert with the US Air Force Band of the Golden West directed by Major Michael Mench. This is the video from Trout’s song called “Science Fair”.