Big Round World Gets the Grammy Nod 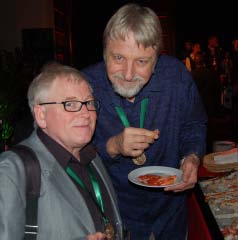 Trout’s latest release was nominated for a 2009 Grammy Award for “Best Musical Album For Children” making them four time nominees. “When we got the call about our Grammy nomination, we were both surprised and excited! This was a big year for kids music and there were a lot of great CDs released. This is our 4th nomination, but the fact that we recorded and produced Big Round World in our studio in Arkansas makes the nomination sweeter. We love LA and we will be there!”